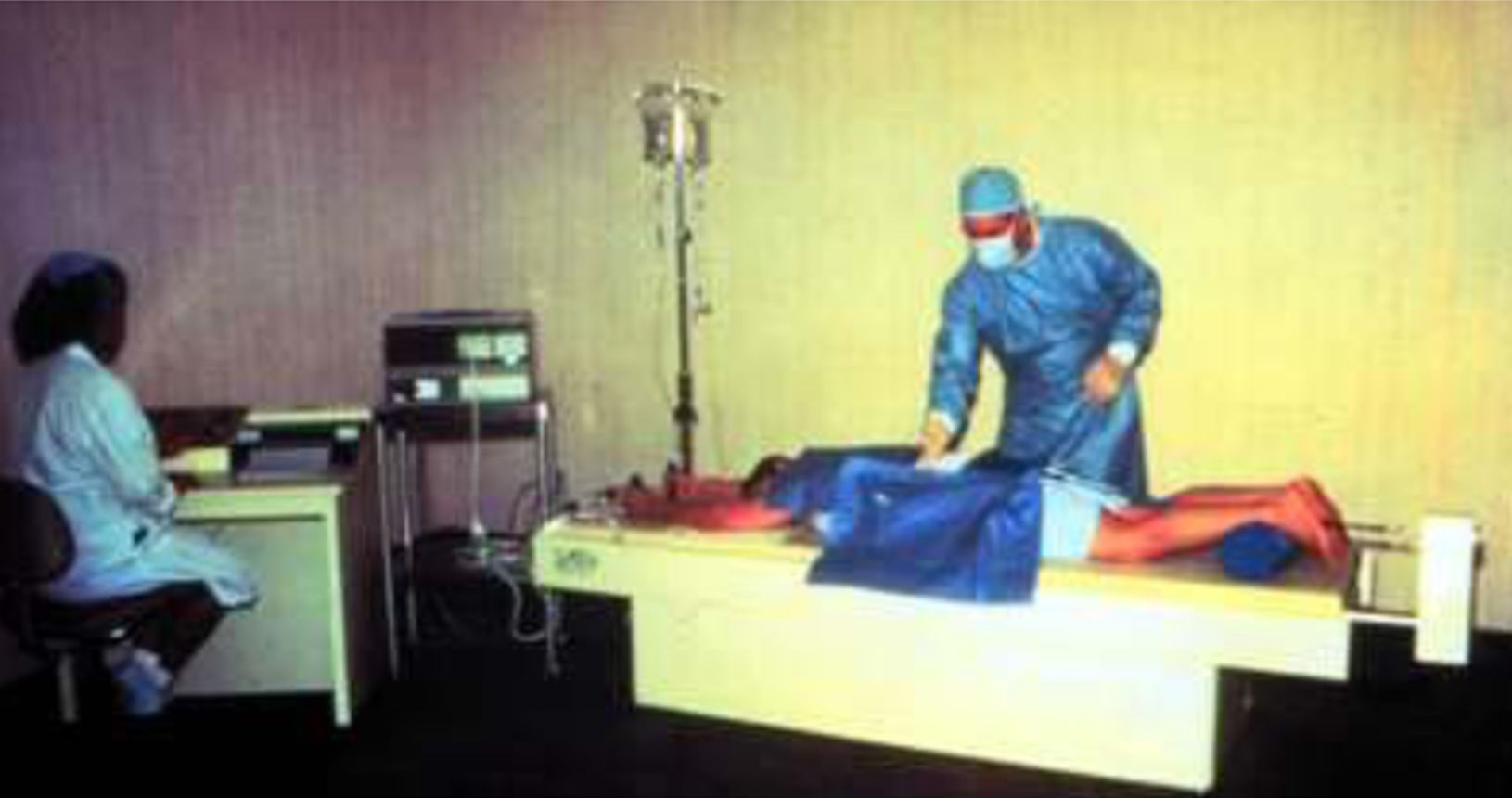 Fig. 1. Photograph illustrating the equipment and the position of the patient as the system is activated. The caudal end of the table extends, applying tension to the pelvic belt. Upper body movement is restrained by having the patient grasp the hand grips. A graph of the tension applied is plotted by a chart recorder on the control console and the intradiscal pressure readings are entered on the same graph at the apex of each distraction curve.

The object of this study was to examine the effect of vertebral axial decompression on pressure in the nucleus pulposus of lumbar discs. Intradiscal pressure measurement was performed by connecting a cannula inserted into the patient's L4-5 disc space to a pressure transducer. The patient was placed in a prone position on a VAX-D therapeutic table and the tensionometer on the table was attached via a pelvic harness. Changes in intradiscal pressure were recorded at resting state and while controlled tension was applied by the equipment to the pelvic harness. Intradiscal pressure demonstrated an inverse relationship to the tension applied. Tension in the upper range was observed to decompress the nucleus pulposus significantly, to below -100 mm Hg.

SURGICAL procedures utilizing conventional and percutaneous approaches have established the merits of decompression of intravertebral disc spaces in the management of low-back pain syndrome associated with lumbar disc herniation.4,12,13,15 Surgery will continue to play an important role in the treatment of patients with low-back pain and sciatica associated with herniated discs and degenerative disc problems. However, for patients who are not candidates for surgery, there is a need to establish a conservative approach that offers an effective means of returning the patient to a functional level of activity.

Considerable controversy exists in regard to the various techniques currently employed. Aside from basic bed rest, there are few noninterventional modalities that have been adopted as standards of therapy. Manipulative techniques for mechanical low-back pain associated with posterior facet syndrome or muscle strain have not been found as useful in the management of herniated or degenerated lumbar discs. Similarly, other modalities including ultrasound treatments, various electrical stimulation techniques, short-wave therapy, acupuncture, steroid injections, and the administration of anti-inflammatory agents and muscle relaxants all have a following among some practitioners but fall short of addressing the underlying problems associated with intervertebral disc lesions. All of these treatment methods fail by comparison to surgery, in our opinion, because they have the common problem of not relieving the pain from neurocompression or from the stimuli associated with a prolapsed nucleus pulposus. The only noninterventional method that has been shown to hold any promise of relieving pressure on vital structures of the lumbar region is that of distraction of the lumbar vertebrae by mechanical forces applied along the axis of the spinal column.2,3,5,14

There has been some investigation into the effects of distracting segments of the spinal column excised from cadavers,11,14 as well as radiological studies that provided evidence that the application of certain forms of tension can distract vertebral bodies.3,5 On the other hand, there are equally pertinent studies that failed to demonstrate any positive effects from other methods of applying spinal tractions.1,10 Nachemson and Elfstrom6-9 have studied the effects of movement and posture on intradiscal pressure. Their measurements show pressure changes caused by positioning and posture range between 25 and 275 mm Hg, suggesting that some positions and postures may be inadvisable for patients suffering from lumbar disc lesions. Anderson, et al.,1 and others have shown that certain traction techniques can actually cause an increase in intradiscal pressure, which would be undesirable in the treatment of low-back pain associated with herniated discs and a neurocompression etiology.

A new form of therapy, termed "vertebral axial decompression," has recently been introduced in the physical therapy department of the Rio Grande Regional Hospital. This treatment modality has shown considerable promise in relieving low-back pain associated with herniated discs or degenerative disc disease of the lumbar vertebrae in patients who are not considered candidates for surgery. The purpose of this research project was to investigate the influence of this new treatment modality on intradiscal pressure in the lumbar spine of patients receiving this form of therapy.

Five cases were selected from among individuals who were referred for a neurosurgical consultation and had previously sustained a work-related injury that resulted in herniation of a lumbar disc at one or more levels. The diagnosis in each case was confirmed by magnetic resonance imaging. The patients chosen were scheduled for percutaneous discectomy. Introduction of the cannula for the purpose of performing percutaneous discectomy offered an opportunity to measure pressure changes in the disc prior to the operative procedure.

The patient was prepared and a cannula was inserted under local anesthesia into the nucleus pulposus of the L4-5 intervertebral disc using anteroposterior and lateral fluoroscopy to position the end. With the cannula in place, the patient was moved to a VAX-D table. The VAX-D equipment is routinely utilized in our nonsurgical treatment program for patients suffering from low-back pain. The equipment consists of a split table design with a tensionometer mounted on the caudal, moveable section. The patient lies in a prone position and grasps hand grips to restrain movement of the upper body, which is supported on the fixed section of the table (Fig. 1).

The cannula was then connected to a pressure monitor using a disposable pressure transducer. The lines were filled with normal saline. The pelvic harness designed for this therapy was fastened around the pelvic girdle and connected to the tensionometer via straps attached to the harness. When the system was activated the caudal section supporting the lower body extended slowly, applying a distraction force via the pelvic harness connected to the tensionometer. The level of tension was preset by the operator on the control console and observed and plotted on a chart recorder. The movement of the table was stopped and held when the desired tension was reached. An average course of therapy consisted of 30-minute sessions on the table once a day for 10 to 15 days. During each session the patient undergoes alternating cycles of distraction and relaxation, the timing and periodicity having been programed by the therapist.

In this study various distraction tensions, ranging from 50 to 100 Ibs, were used for vertebral axial decompression therapy. The distraction tensions applied were monitored on a digital readout and recorded on a continuous graph tracing by a chart printer incorporated in the control console. The resulting changes in intradiscal pressure in the L4-5 nucleus pulposus were observed on a digital readout on the pressure monitor, and the readings were entered onto the chart recording at the point when the apex of distraction tension was achieved. The pressure readings were then applied to the negative-range calibrated curves prepared for each transducer to derive accurate intradiscal pressure readings. 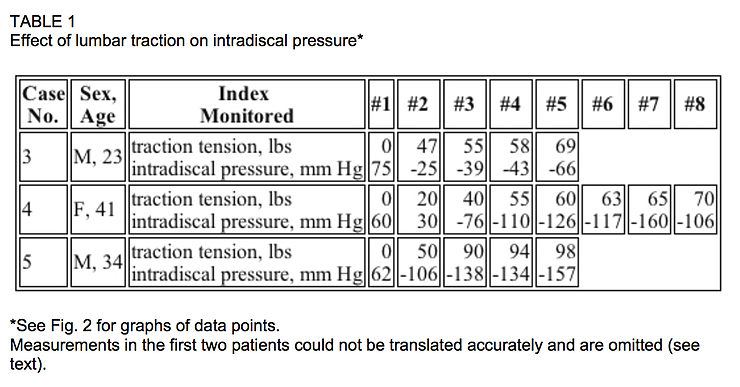 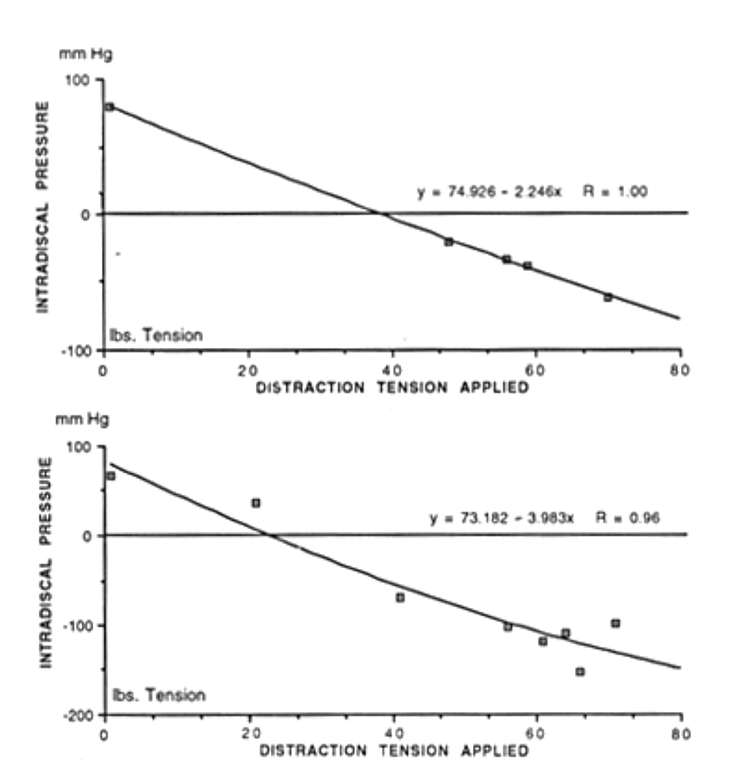 The biological transducers employed in this study are primarily designed to measure pressure changes in the positive range. Following each procedure the presssure monitor and the disposable pressure transducer used for each patient were individually calibrated and a correction curve was plotted showing the transducer readings versus actual pressures, to correct for the nonlinearity of the instrumentation in the range of negative pressures achieved. A pneumatic calibration analyzer with an accuracy of 2% was used for this purpose.

Intradiscal pressure changes were monitored in five patients. When the first two patients were tested, it was not recognized that biological transducers produce nonlinear measurements in the negative ranges at the levels achieved in this study. Since the disposable units had been discarded it was not possible to translate the findings accurately: however the intradiscal pressures were observed to be significantly lowered. Also the findings were consistent with the later three patients, for whom the transducers were retained and individually calibrated, permitting accurate interpretation of the results.

The results indicate that it is possible to lower pressure in the nucleus pulposus of herniated lumbar discs to levels significantly below 0 mm Hg when distraction tension is applied according to the protocol described for vertebral axial decompression therapy. These findings may offer a plausible explanation for the mechanism of action for this therapeutic modality. Future research is warranted to study the decompression phenomenon achieved with this technology and its relationship to clinical outcome in patients with anatomical dysfunction of the lumbar spine. We are preparing a follow-up study on the clinical efficacy of this treatment modality.

The authors gratefully acknowledge the director and staff of the Department of Physical Therapy for their assistance in administering the vertebral axial decompression therapy.

The authors have no financial interest in either the equipment or the methodology advanced in this study.

This website uses cookies to improve your experience while you navigate through the website. Out of these, the cookies that are categorized as necessary are stored on your browser as they are essential for the working of basic functionalities of the website. We also use third-party cookies that help us analyze and understand how you use this website. These cookies will be stored in your browser only with your consent. You also have the option to opt-out of these cookies. But opting out of some of these cookies may affect your browsing experience.
Necessary Toujours activé
Necessary cookies are absolutely essential for the website to function properly. This category only includes cookies that ensures basic functionalities and security features of the website. These cookies do not store any personal information.
Non-necessary
Any cookies that may not be particularly necessary for the website to function and is used specifically to collect user personal data via analytics, ads, other embedded contents are termed as non-necessary cookies. It is mandatory to procure user consent prior to running these cookies on your website.
Enregistrer & appliquer